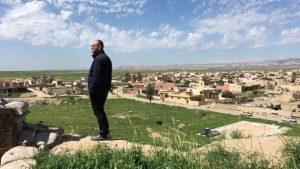 Christians living in the Nineveh Plain, who only just returned home after the defeat of Islamic State, were forced to flee again as Kurdish Peshmerga fighters clashed with Iraqi government forces. The fighting wounded civilians, including children.
The Christian population of Northern Iraq has been caught in the crossfire. Many of these Christian areas in the Nineveh Plain – the ancestral homeland of Christianity – lie in the disputed areas between the Kurdistan Regional Government (KRG) based in Erbil, and the central Iraqi government further south in Baghdad.

Since Islamic State’s defeat, Iraqi Christians have started to return to the towns and villages in the Nineveh Plains region and to rebuild their homes. Teleskof was only recently liberated from Islamic State and was recently rebuilt. Around 1,000 Christian families have been forced to evacuate the Christian village of Teleskof again.

The Christian population of Iraq is down to about 200,000, a stunning drop from the 1.5 million who lived there before the fall of Saddam Hussein. Big worries arise that Christianity is practically of being driven completely from its ancestral home.

We pray that the wounded will be healed soon. May our mighty God protect our Christian brothers and sisters in Iraq.

Photo taken from the source below:
http://www.foxnews.com/world/2017/10/24/iraqi-christians-forced-to-flee-homes-again-after-skirmishes-between-kurds-and-central-government.html

If you want to #donate and help us to build an orphanage for orphan children, please use one of these three opportunities:
Purpose (Verwendungszweck): „Waisenhaus“
1.) We Are Christians – Aramaic Charity Organization e.V.
IBAN: DE94610500001255548165 – BIC/SWIFT: GOPSDE6GXXX
2.) Online-Donation by credit card, PayPal, Direct Transfer at: http://wearechristians.de/spenden
3.) Donation by Paypal:
PayPalEmail: spende@wearechristians.de
Oder direct-link: http://paypal.me/wearechristians
By adding your name and full address at transfer data, you automatically receive a donation certificate.
Every single cent helps us to give people, who are suffering from war, their dignity and an important piece of hope back.
We Are Christians – Aramaic Charity Organization sincerely thanks you from the deepest heart for your support and wishes you Gods blessings.